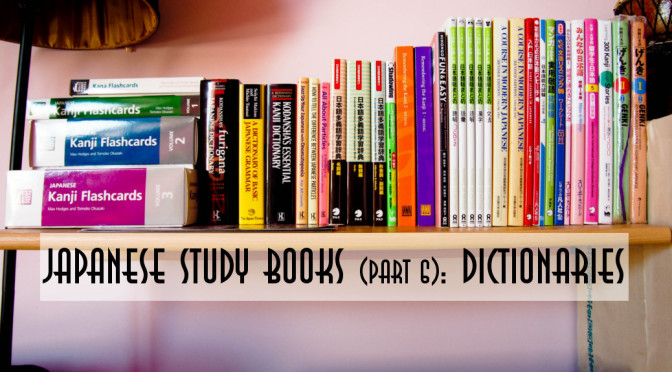 A crucial point when learning a new language is vocabulary. The more words you know the easier an language becomes. Because even if you do not recognize the grammar of a sentence , if you can understand the words, you often still understand the essence of the sentence .

In the beginning, you often have enough of the vocabulary lists that you can find in the grammar books. Once you’re done, you still want to expand your vocabulary. Because you can know all the grammar in the world, but if you do not know the words you hit a wall, if you want to have a fluent conversation.

You can increase your vocabulary in many ways, by reading (see part 4 ) by watching Japanese TV, learn kanji, etc … But now I ‘m concentrating to take the JLPT N3 in December, I am specifically looking for vocabulary that you need to know. 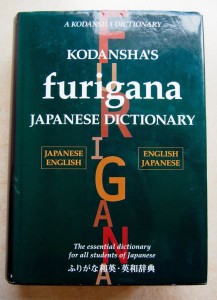 This is one , if not the most approachable dictionary English-Japanese, Japanese-English, which you can find at this given time. As the title says it all his words accompanied with furigana. So even though you have limited knowledge of kanji, you can read everything smoothly.

The vocabulary in the dictionary is not very extensive. But it contains the most used words that you need as a beginner . Are you looking for a more complex word than you have to look somewhere else. 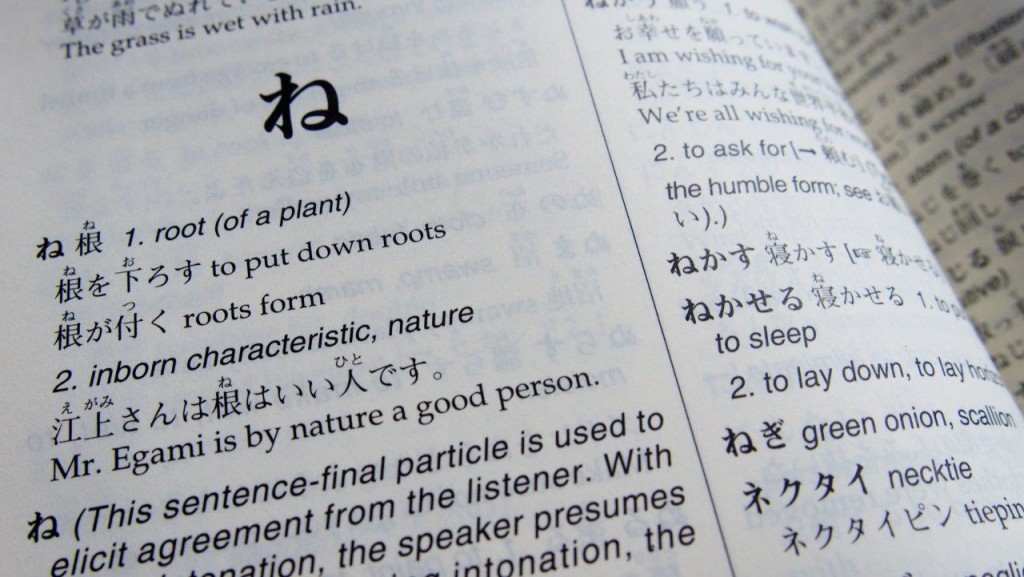 Easy to use and to understand 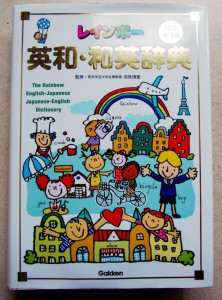 This children’s dictionary is my favourite dictionary to just sometimes random read in it. In a children’s dictionaries they always spend much attention to the images. You can use it bi-directional; English-Japanese, Japanese-English. The focus is on the world of children. Admit it, how many dictionaries mention aliens, dragons and trolls? The many images make reading this book a real adventure. With the CDs that are included you can indulge yourself from learning Japanese children songs. 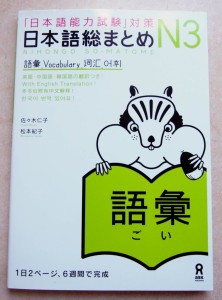 This is not a dictionary but because it only focuses on vocabulary I put this book here.

This is the latest book from the Nihongo so Matome N3 series. Yes, you read it good, For vocabulary, there is a separate book. These words are not mentioned in the other books. Have you mastered all the vocabulary of this series, then you are certainly well prepared to take JLPT N3.

As with the other books, the vocabulary is also divided into themes. In the frames are mostly nouns and verbs. In the end you always find some sample questions. These questions are the same questions drafted as the JLPT.

We only make use of one alphabet. But in Japan there use three different ones. Kanji takes the dominant position in this whole. Because Japanese officially need to know 2136 kanji, and certainly sometimes they encounter a kanji that they don’t recognize. So this is also a good subject to make a dictionary on. But we ( students Japanese ) certainly also need a kanji dictionary to help us study. 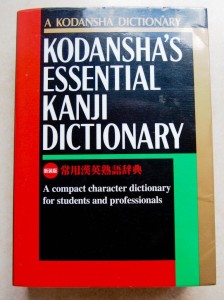 For me, this dictionary is the most famous kanji dictionary I’ve heard of. All the kanji are accompanied by a good number of sample words which is handy because all different readings of a kanji are covered with these example words. In the beginning it’s a bit difficult to look up kanji. In a kanji dictionary you can look up a kanji in many different ways, this is explained in the dictionary. After you practiced it a bit you’ll get a hang of it.

Kanji are presented on a clean structured way.

I find a kanji dictionary a must have. You can find dictionaries in different forms nowadays; books, electronic dictionaries, Android or IOS apps. Everyone has a different preference of what they like the most. 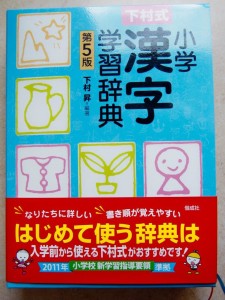 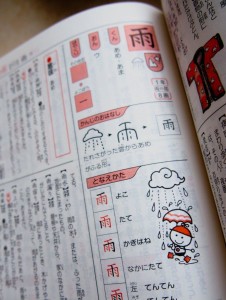 This is a children’s kanji dictionary that I bought. This dictionary is for Japanese children in primary school. Therefore there is a lot more information in it compared to the other dictionaries. It’s a nice extra if you want to read something. This is not a dictionary for beginners.

Other types of dictionaries

Dictionaries certainly are not be limited to simply lists of words. In Belgium, you have the green book, here you can look up the spelling of words, and the ‘Van dale’ dictionary to search for a meaning of a word. There are so many kinds of dictionaries. Here are some ‘special’ dictionaries I own.

A dictionary of Japanese proverbs 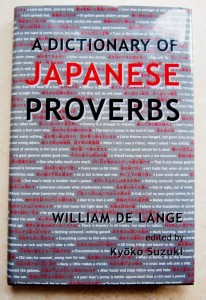 Each language has proverbs and every language is trying to bring them together in a dictionary. The nice thing about this dictionary is that it tries to look for similarities between proverbs of two completely different languages ​​and cultures. The Japanese and English/ American culture.

The dictionary tries to match Japanese proverbs and their meaning with an English equivalent. Sometimes there are proverbs which have a same meaning. But often the proverbs are not comparable. But there most of the time a proverb that has a nearly identical meaning. Making them so that they can be compared. Or sometimes miraculous, there is a proverb that translates exactly the same but the meaning is just the opposite. 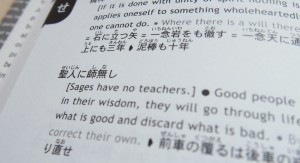 “sages have no teachers’

It is a nice dictionary to have. I myself use quite often proverbs in conversations. I find it fascinating to see that a language that has a completely different basis and that is almost unaffected by the western world, also has so many of these great wisdoms.

A learner’s dictionary of multi-sense Japanese words BY: ALC

If you are already studying Japanese for a while, then you definitely have experienced that there are words with the same pronunciation but a different meanings (aka. A homonym). You just do not know what meaning they mean by looking at the context of the sentence or by looking at the kanji that is used. This book series focuses only on those words. 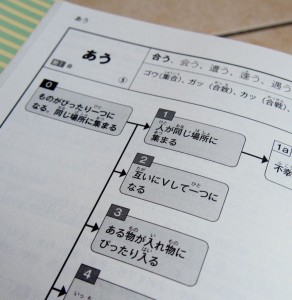 The many different meaning of AU

The series consists of three volumes, nouns, adjectives and adverbs and, book three verbs. The books always start over from the hiragana word (This is the pure form of the pronunciation of the word). Then you can see how many different meanings of this word has and the used of different kanji. For each word there is then a short explanation, and an example sentence.

One of the meanings explained

This book series is fairly unknown. I found nowhere on the internet a review of this series. But I think the series deserves a little more recognition. I’m sometimes startled of how many different meanings some words have. Only if you are aware of this you begin to start capturing the true essence of a language. Humor is a good example. In my own language they often makes used these allusion. These books give you a first insight. There’re Definitely worth it!

A dictionary of basic Japanese grammar By: Seiichi Makino

In the second part, Japanese study books: Grammar  I already talked about, A dictionary of basic Japanese grammar.  I’m not going to talked again about this books. But I have two more dictionaries that are related to Japanese grammar.

Particles can be the death of many students. It’s a bit of a vague concept that we do not have in our language. Some particles have one specific function, others have 20 different meanings/ functions. This two booklet can perhaps rescue you. It give you a way to find a structure in all these different functions.

The following two books are different and yet not so different. They are both written by Naoko Chino. The difference is in the structure of the book. Both have the same content. It is therefore not necessary to buy both.

All about particles: A handbook of Japanese functioned words 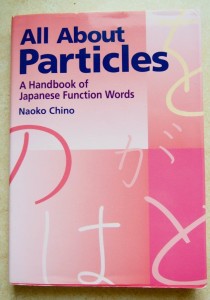 All about particles: A handbook of Japanese functioned words BY: Naoko Chino

This book has ordered all the meanings of a certain particle together. Is there therefore a particle with 10 different meanings, then these are beautifully arranged together. All the different functions are listed, with a brief explanation and are followed with an example sentence. 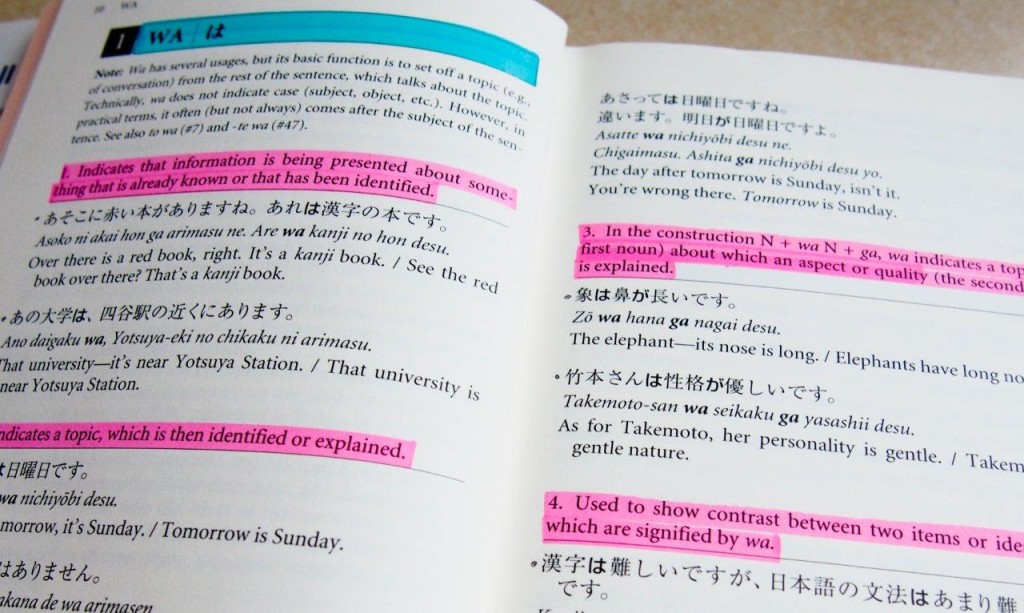 All the different meaning if the particle HA

How to tell the difference between Japanese Particles: comparisons and exercises 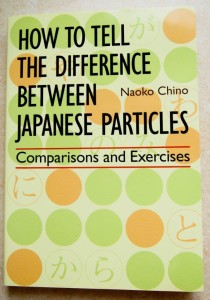 How to tell the difference between Japanese Particles: comparisons and exercises BY: Naoko Chino

This book starts from the different functions. For example, the various particles that define a “place of action” stand together with a number of example sentences and there is explained where the nuance lies. In the end you also find a short quiz where you can test whether you understand it. 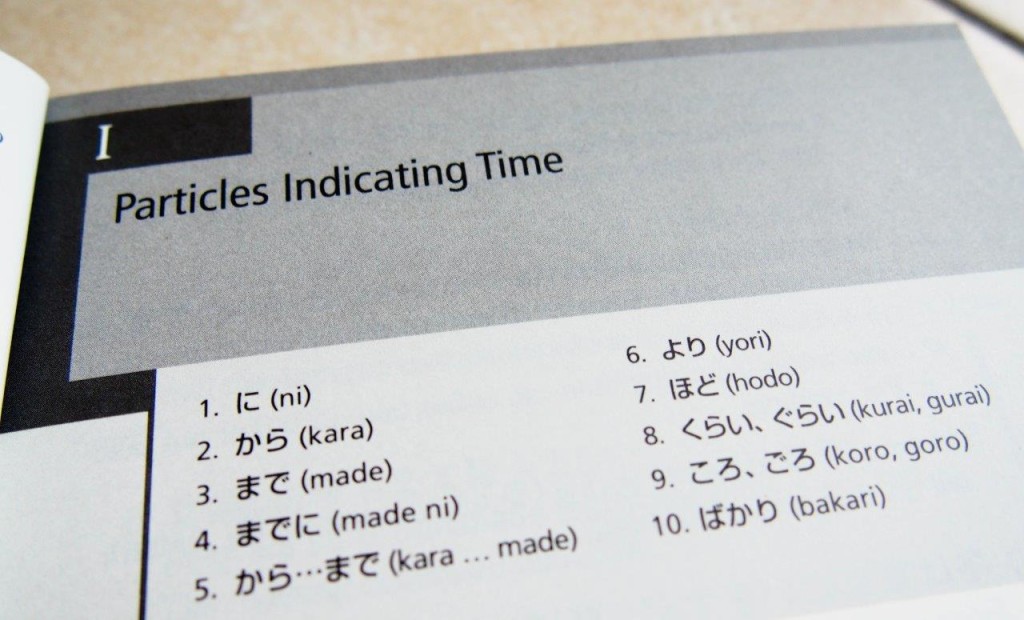 Which one is the best?

Which book you want to buy depends on your preferences of ordering. I myself am still not sure which one I prefer. What is your opinion?

The emperor of all dictionaries 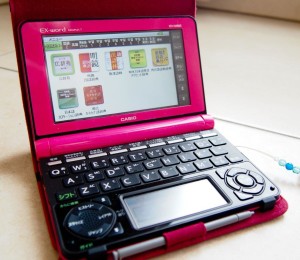 As the Asian stereotype says that student must earn the perfect grades in school. These electronic dictionaries adjust a little bit in this picture. You can call them almost a mini laptop. They are already available for children in primary school (6-12 years). In Europe, however, we know the concept of an electronic dictionary. But often it looks like a small calculator-like device, with a classic black and white screen. They are not popular and you can’t find them easy. But in Japan they have developed this concept to perfection.

There are different models, the earliest models are designed for children of primary school. The most advanced models specialize in medical terms, international law or concentrate on other languages ​​such as German, Korean, … etc.

I have a model for a high school student. And you can find almost everything on it. If you look at the official list this little computer devices includes more than 200 books on it. From an ordinary dictionary, an explanatory dictionary, kanji dictionary, encyclopedia, … Anything you can think of in relation to study an language. There are also several books to practice English on it, small tests or courses. You can also find travel dictionaries in more than 10 different languages.

Many Japanese therefore have an electrical dictionary. When they travel to Europe they take this little gadget with them. Most major European languages ​​with an extensive vocabulary are installed on it. And many ideal example sentences for travelling, where can I find a toilet?, to How much is this?. The electronic dictionary also can pronounce all these sentences. Ideal for learning the pronunciation. 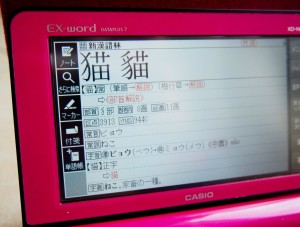 Looking up a kanji

I use this mainly for the vocabulary and kanji. Vocabulary you can just lookup. By using the general search function you get to see translations of the various dictionaries that are included. As a result you are presented with various synonyms which you can add to the conversation to get some more variation. 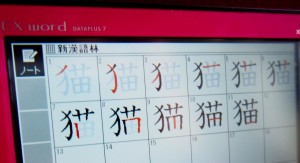 How to write the kanji for ‘cat’

The kanji dictionary is I think the most amazing feature of all. You can look up any unknown kanji in many different ways. By writing the kanji, by strokes, by pronunciation, etc. Once you find the kanji you get presented with various example sentences and words. You can also view an through an animation the stroke order of the kanji. It is certainly not easy in the beginning to look up a kanji but once you have the hang of it, you can instantly find anything. (Maybe I’ll write a post in the future about “how” to use an electronic dictionary.)

You can choose between ENG or the NL version*

(Look out for the confirmation mail to confirm!!)